Why the elderly need to be digitally connected? 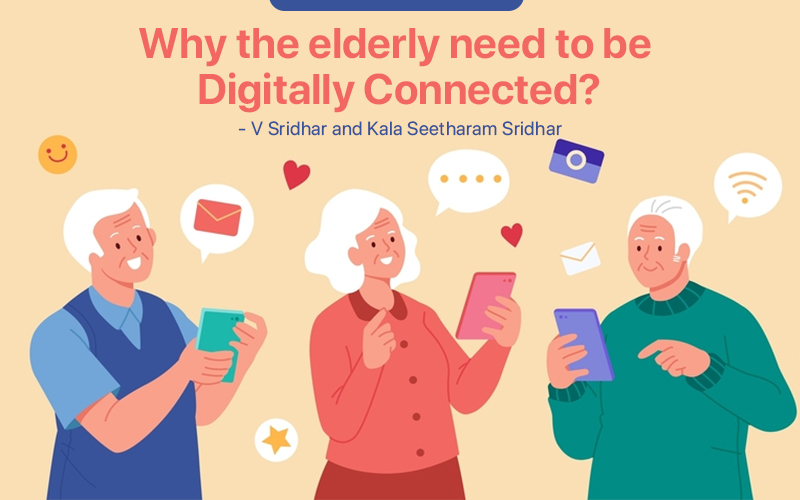 The anniversary of the signing of the first International Telegraph Convention and the creation of the International Telecommunication Union (ITU) is celebrated on May 17 as World Telecommunication and Information Society Day (WTISD). The theme this year is “Digital technologies for older persons and healthy aging”. The Secretary General of ITU – Houlin Zhao, has indicated in his message that “equitable access to digital technologies isn’t just a moral responsibility, it’s essential for global prosperity and sustainability”.

It is in this context that we analyse how Information and Communication Technologies (ICT) bridges the gap between the young and the old; as well as enable people to be mentally healthier and active in their old age. According to the World Health Organization (WHO), 1 in 6 people in the world will be aged 60 years or more by 2030; 80 percent of older people will be living in low- and middle-income countries. As per the recent report by Bloomberg, there are about 138 million elderly persons in India in 2021, including 67 million men and 71 million women. As per the Census of India 2011, nearly 67% of the urban population is in the workforce (15-59 years), which is only 61% for rural areas. Hence greater proportion of older persons are in rural areas where uptake of technology is lower than in urban areas. The ever-changing digital technologies, mostly designed for the younger population, pose severe challenges to the older population, in terms of understanding and use. However, research indicates that use of digital technologies improves cognitive abilities especially amongst older adults. According to a study by Michigan State University, technology use among older adults has even been linked to better self-rated health, fewer chronic conditions, higher subjective well-being, and lower depression.

Researchers have analysed the intersection of age and technologies for a long time. According to the journal of the Gerontological Society of America, (i) the rising cost of healthcare, (ii) the need to sustain the cognitive ability and general health of the older population and (iii) the continued innovation in digital technologies, especially in healthcare are the main reasons for finding ways to improve adoption of digital technologies by the older population. It has been found by the researchers that with age, people become less comfortable and less efficient with the use of technologies. Hence it is very important for technology designers to take into account the unique characteristics of older people so that they are not left out. Digital technologies can be more accessible if they use participative design by including the older adults in the innovation life cycle and building their requirements in the design process.

There have been many studies, especially during the COVID pandemic, on the loneliness and social dis-engagement experienced by the older people. Many studies found that using the Internet to connect with family and friends indirectly affected well-being by decreasing loneliness and increasing social engagement. Messaging and video/audio conferencing applications have enabled improvements of inter-generational ties across national boundaries through seamless communication. The grandparents and parents can be in touch with their grandchildren and children through a myriad of digital channels not available earlier. We see that, in general, women adapt better to use technologies than their male counterparts.

Enabling use of apps such as Medisafe for medicine reminders, Lumosity for memory games, LibroVox for audio books, Words with Friends app for multiparty word games, iBP for blood pressure monitoring and tracking are some examples of applications that have been built with the older generation in mind. A pocket activity tracker adapted to work with older people can be used to give insight into the amount of physical activity older people undertake and increase awareness and motivation to increase their physical activity. It would be helpful if the apps can be designed to function in areas where Internet connectivity is not available or reliable. For instance, the all-India (rural plus urban) internet penetration is only 36% with a maximum of 69% in the highly urban and educated NCT of Delhi, and a minimum of 25% in Odisha.

We need to remember that those in their 80s, were born when “Apple” was a piece of fruit, and “Tablets” were something that they took when ill! Migrating them to digital tablets, and digital apples requires some effort. When we lament the inability of older people to understand and use the digital gadgets and myriad of services, we must remember that the speed of evolution of these technologies have surpassed the human ageing process.

Hence, an integrated approach in diverse areas such as gerontology, cognitive psychology, human factors, neuropsychology, and of course digital technologies is needed to ensure that technology will be useful for all of us in our later years. Technology should assist and complement human autonomy and not substitute it, especially for the older generation to enable their healthier aging, which has been appropriately chosen as the theme for this year’s World Telecommunication and Information Society Day.

The authors are currently visiting University of Southern California and as Fulbright Nehru Fellow at UCLA.