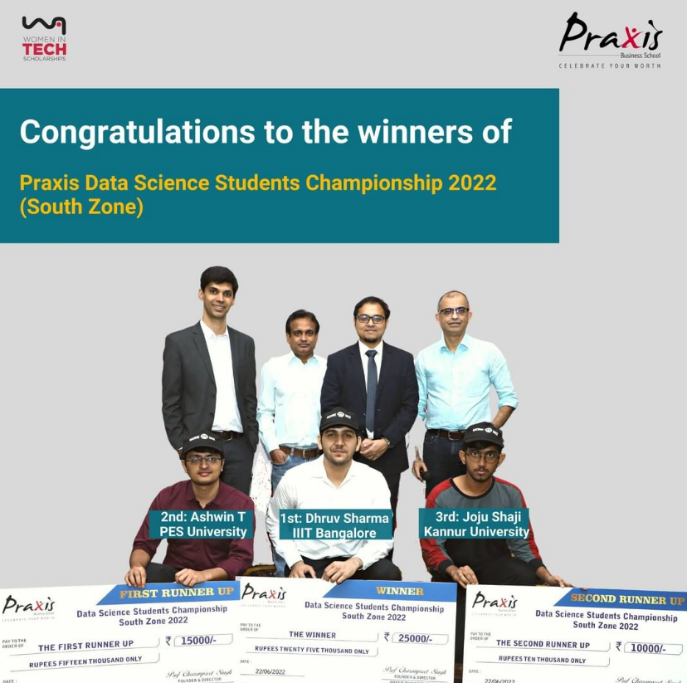 What Dhruv Sharma learnt in the second year of his iMTech (CSE) came in handy to win a hackathon! In the first-ever Praxis Data Science Student Championship-South Zone Challenge, held, Dhruv won a first place after a grueling final round.  “We were introduced to machine learning in the second year of our course, where we learnt about all the basic models and machine learning practices. This exposure helped me to win the hackathon and answer more technical questions asked by the jury in the final round,” he shares.

Dhruv not only produced a realistic and sustainable solution to the “Rent Predictor” challenge but also walked away with a cash prize of INR 25,000 as well as the winner’s certificate.

“It was my first time giving a Machine Learning (ML) hackathon on machine hack. Yet, I was comfortable working on the dataset provided in the competition because of my previous exposure to such datasets. We were provided with an excellent real estate property dataset from 8 cities in India, and the competition was about to create a model to derive some facts and results from the dataset that could help a rental business to increase its revenue. It was also expected to suggest a workflow starting from the model construction to its deployment. It was a great learning experience and it was an ecstatic moment when I was announced as the winner, which I did not see it coming!” He adds that the most important takeaway from the hackathon was his interaction with the jury that comprised some senior data scientists in the industry. Also, learnt some new and interesting ideas in ML.

Among the other institutions represented in the finals were Indian Institute of Technology (IIT), Madras, IIT Kottayam, Great Lakes Institute of Management, Chennai and AKNU College of Engineering from Rajahmundry in Andhra Pradesh, among others.

Expand The Pie, Never Say No to Try