What are the first thoughts that cross your mind when you think of a military officer? Based on your thinking ability, your answers might be in the spectrum of extremely courageous to ruthlessly resilient. True, but the duty of military personnel is such that the motivation is always one, that is working for humanity. The career journey of Mr. Maniram, Security Officer of IIIT Bangalore had an adventurous journey filled with courage, confidence, discipline and strength. Only a few get the opportunity to live the life of a military officer like him. Mr. Maniram was a Military Police Junior Commissioned Officer in the Indian army before joining the institute. In his role, he was responsible for planning and executing hundreds of military operations.

The armed forces or the military of any country is widely known as one of the most disciplined organizations of the nation. It is the result of order and obedience that exists among the soldiers who exercise self-discipline and integrity. However, no matter how disciplined the soldiers are, they are also prone to err and the need for a supervising authority becomes necessary and here comes the role of the military police. It is the duty of military police to perform policing functions within the armed forces, as opposed to the regular police, which performs policing functions within the civilian population.

Mr. Maniram was a police of the military in charge of enforcing discipline and maintaining law and order in the military environment and for military purposes. They serve as police units in the armed forces and protect lives and property by enforcing military laws and regulations. He was also responsible for controlling traffic, preventing crime, and responding to emergencies. During his tenure, Mr. Maniram has carried out piloting and escorting of VIPs and managed traffic control duties as well.

Speaking to Naviiina, Mr. Maniram recalls his inspiration to join the Indian Army, “I have served in the Indian Army for 30 years taking inspiration from my father who also served in the erstwhile British Royal Military Police and later became part of the Indian Army.” He gained knowledge of military professionalism, customs and courtesies during his job, “I was a part of critical decision-making team during wartime, internal conflicts and counter terrorism in troubled areas of Northern and North East sectors of India. I have also carried out police duties as part of UN Peace keeping forces in the areas of West Asia including Israel, Jordan and Syria,” he beams.

After his retirement from the military force, Mr. Maniram joined IIITB as a Security Officer managing the overall security of the campus ensuring compliance of student discipline, the safety of students and employees of the institute. Supervising and training the uniformed security personnel on the job also comes under his purview. Working for the last two years, he finds the inclusive culture and ethos is very supportive for one to be a part of IIITB.

His love for serving the nation has been passed on to his next generation too. His son, Mr. Sandeep Kumar is a pilot in the aviation wing.

As a parting shot, he says that the world is living in transformed times with multiple friction points and security threats. The world can be in order where the military force remains intact. As responsible citizens we should impart the values of self-discipline and courage to the younger generation. 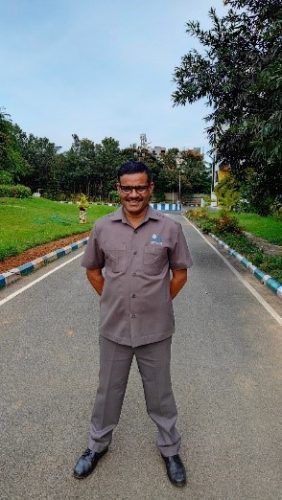